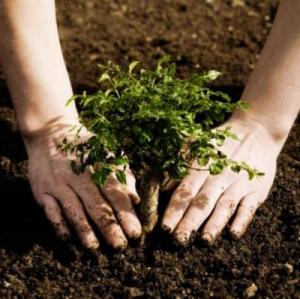 Afforestation, the planting of trees and plants on land that has not yet been forested (2), is a great, cost-efficient way of helping to mitigate climate change, as well as planting bio energy crops that collect carbon dioxide and can also be burned as fuel. Read more on bio energy crops here: http://bioenergycrops.com/.

The term afforestation is often confused with reforestation, which is planting trees in already existing forests that have a decreasing number of trees. Think of afforestation more as creating a forest where it did not previously exist.

How can citizens contribute to afforestation? It's quite simple. Start a garden, plant trees in your yard if you have room to do so, and urge your friends and neighbors to do the same. According to Earth Talk, the easiest ways for individuals to offset the carbon dioxide they generate on a regular basis is simply to plant trees anywhere they possibly can (3). If you have any open land on your property that isn't being used for anything in particular, the simple act of planting a few trees can make a significant difference in offsetting your carbon footprint.

Trees aren't the only plants that absorb carbon emissions. In fact, all plants and trees absorb carbon dioxide during the photosynthesis process. That means that your garden is not only beneficial to you and your family, but it is beneficial to the environment as well. Be sure to choose plants and trees that are appropriate for your region and climate so that they are easier to maintain(3). View a list of native plants in each state in the U.S. at http://www.plantnative.org/reg_pl_main.htm.

According to the Eco Preservation Society, the average person in the United States generates about 2.3 tons of carbon dioxide every year. A single mature tree can absorb carbon dioxide at a rate of 48 pounds per year and up to an entire ton throughout its whole life, while releasing enough oxygen into the atmosphere to support one or two human beings. That means, if every family, in America alone, were to plant just one tree, the amount of carbon dioxide would be reduced by one billion pounds each year (4). So, if you are looking to make a positive impact on the planet, start a garden or plant a tree, it's easy and cost-efficient!

(1) Gleeson, Nielson, and Parker (2009). "Carbon offsets from afforestation and the potential